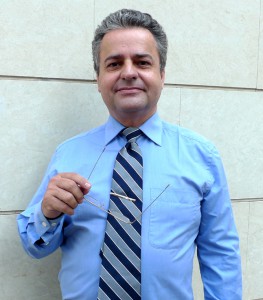 1998-1999 Invited scientist at the University of Washington, Seattle, USA

1986-1988 Student; Master in Science at the Dept. of Immunology at the University of Birmingham (United Kingdom).

o Identified the phyllolitorin receptor by an elegant combination of calcium intracellular flows and high and low affinity molecular binding with respect to Gastrin-Releasing Peptide and Neuromedin B.

o Paradigmatic shift on the synthesis and processing ability of non-neuroendocrine cells to secrete neuropeptides and their respective receptors.

o Addendum on the “doble hit” oncogenic theory by the ability of a co-infective viral agent with an interleukin-6 active gene and specific gene mutations such as on c-myc, c-ras, etc…. A simple mutation suffices for the development of the oncogenic machinery if it is combined with a particular viral infection.

o Discovery of a specific tumor marker for neuroendocrine tumors. A protein with a molecular weight of 28.000 Dalton whose main interest is for the early diagnosis of small cell lung tumors.

• A new mathematical model on an abstract concept such as prestige for the assessment of hierarchical concepts.
• The largest biomedical dictionary English / Spanish with more than 26.000 concepts.

• Production of intelligent and efficient biomedical libraries.
• Production of medical rankings. Doctors rankings. Where are the best doctors in the world?
• Development of retrofeeding loops on new concepts in hierarchical data bases.
• Syntactic analysis to understand natural language. Conversion of metaphorical language into numbers using classical logic.
• Minimal conceptualization over the structure of a syntactic grammar.
• Structure of the creative process an development of new creative abilities. Study over the set of premises and the puzzle of fuzzy logic with paradigmatic branch changes.
• Retrograde thinking. Study on how to convert circumstantial premises and their exceptions. A new and faster system to understand natural phenomena and to induce paradigmatic shifts.
• Theoretical analysis over classifying aspects and hypothetical reasoning.

• Lecturer on oncology, cardiovascular diseases, scientific method, and scientific writing.
• Ability to understand and explain on clinical biomedicine and basic sciences to any audience.

• Marketing project for the Hope Heart Institute. It brought $ 10 million.
• Treatment optimization for tumors with uncertain prognosis. Searching for medical alternatives.
• Study on the necessary elements to develop a successful cancer research center. Theoretical components.
• Development of a biomedical research program. A fountain of spin offs.
• Development of a research strategy based on previous programs. Selection of the most mature and viable projects.
• Development of a licensing portafolio for the pharmaceutical industry. Identification of stable partners. Association with biotecs using some basic common sense. Identification of non-sense versus sensible biotecs.

Fellowship from the European Community Against Cancer

Doctor Cardona: Characterization of ligand binding and processing by gastrin-releasing peptide receptors in a small-cell lung cancer cell line.
C Cardona, N M Bleehen, and J G Reeve
Biochemical Journal. 1992 January 1; 281(Pt 1): 115–120.
Abstract
The ligand-binding properties of the gastrin-releasing peptide (GRP) receptor and the cellular processing of GRP have been studied in the small-cell lung cancer (SCLC) cell line COR-L42. Scatchard analysis of GRP receptor expression indicated a single class of high-affinity receptors (Kd 1.5 nM) and approx. 6700 receptors/cell. GRP bound to its receptor with a Ki of 2.4 nM. The bombesin-related peptides neuromedin B (NMB) and phyllolitorin also bound to GRP receptors with Ki values of 22.7 and 59.1 nM respectively. Binding of 125I-GRP to COR-L42 cells increased rapidly at 37 degrees, achieved a maximum at 10 min and declined rapidly thereafter. At 4 degrees C, maximum binding was achieved at 30 min and the subsequent decline in cell-associated radioactivity was slower than that seen at 37 degrees C. Acid/salt extraction, to separate surface-bound ligand from internalized GRP, indicated that after receptor binding 125I-GRP was rapidly internalized. To determine the pathway of 125I-GRP degradation, binding studies were carried out with the lysosomotropic agent chloroquine (5 mM), and with phosphoramidon (10 microM), an inhibitor of the membrane-bound enzyme (EC 3.4.24.11). Both agents markedly inhibited the degradation of GRP, indicating that this process involves a lysosomal pathway and a phosphoramidon-sensitive pathway, possibly involving the EC 3.4.24.11 enzyme. GRP receptor down-regulation was observed following a 10 min exposure to 100 nM-GRP. With longer pretreatment times the number of binding sites recovered to 80% of control values. Treatment with 5 mM-chloroquine plus GRP or cycloheximide (10 micrograms/ml) plus GRP demonstrated that the majority of GRP receptors are recycled. NMB and phyllolitorin pretreatment did not influence the subsequent binding of 125I-GRP, suggesting that these peptides do not down-regulate GRP receptors. Doctor Cardona article.

Doctor Cardona: Production of neuromedin B and neuromedin B gene expression in human lung tumor cell lines.
Cardona C, Rabbitts PH, Spindel ER, Ghatei MA, Bleehen NM, Bloom SR, Reeve JG.
Cancer Research. 1991 Oct 1;51(19):5205-11.
Abstract
Gastrin-releasing peptide (GRP), a mammalian bombesin-like peptide, has been shown to be an important autocrine growth factor for small cell lung cancer (SCLC). However, not all SCLC cell lines express the GRP gene or respond mitogenically to GRP stimulation, suggesting the existence of other autocrine pathways in this tumor. Neuromedin B (NMB), the mammalian counterpart of amphibian ranatensin, has been shown to be a mitogen for SCLC cell lines in vitro. To determine whether NMB is a potential autocrine growth factor for lung tumors, NMB gene expression, peptide synthesis, and secretion have been investigated in a panel of SCLC and non-SCLC (NSCLC) cell lines. Northern blot analysis and enzymatic amplification from mRNA by polymerase chain reaction showed that the NMB gene was expressed in all SCLC and NSCLC cell lines examined. In contrast, the GRP gene was expressed in four of six classic SCLC cell lines but not in variant SCLC or NSCLC cell lines. Immunoreactive NMB was detected by radioimmunoassay in the majority of classic SCLC, in one of three variant SCLC and in one of three NSCLC cell lines, and secreted NMB was detected in medium conditioned by a SCLC and a NSCLC cell line. The present study also demonstrated the presence of immunoreactive GRP in the absence of detectable GRP gene expression. The antiserum used in the GRP radioimmunoassay failed to cross-react with NMB but showed some cross-reactivity with amphibian phyllolitorin raising the possibility that certain SCLC cell lines may produce a phyllolitorin-like peptide. Doctor Cardona article.

Doctor Cardona: Characterization of ligand-binding and processing by gastrin releasing peptide receptors in small cell and non-small cell lung cancer cell lines.
C. Cardona, J.G. Reeve & N.M. Bleehen
British Journal of Cancer 1990, 62; 474-548
Abstract
Bombesin (BN) and its mammalian homologue gastrin releasing peptide (GRP) have been shown to stimulate the growth of small cell lung cancer (SCLC) cell lines in vitro However, no obvious correlation was observed between the in vitro response to BN/GRP and the presence of specific BN/GRP receptors. Furthermore, the processing events that occur after BN/GRP binding have not been investigated in lung tumour cell lines. To gain further insight into the mechanisms involved in the mitogenic action of BN/GRP, the expression of GRP receptors and the kinetics of GRP binding and internalization have been studied in a panel of 10 SCLC and 3 non-SCLC (NSCLC) cell lines. For the detection of GRP receptors 106 cells were incubated with 0.5 nM ’25IGRP for 30 minutes at 37°C in the presence or absence of 1 pM cold GRP. Cells were pelleted, washed and specific binding determined. In contrast to previous studies, specific GRP binding sites were detected consistently on all SCLC and NSCLC cell lines examined although GRP binding varied between lines (0.06-2.01 fmol 10-6 cells). For all cell lines, binding of ’25IGRP increased rapidly with time, peaked after 15-60 minutes depending on cell line, and subsequently decreased. Extraction of surface-bound ligand at low pH indicated that the iodinated peptide was internalized within minutes in both SCLC and NSCLC cells. Pre-incubation of cells with GRP markedly reduced the subsequent binding of ’25IGRP to SCLC cells but not to NSCLC cells. These results indicate that GRP receptors are present on both SCLC and NSCLC cells, that in both cell types GRP is internalized and degraded, but that in contrast to NSCLC cells, surface receptors for GRP on SCLC cells are down-regulated. Hence regulation of the proliferative response to GRP stimulation may differ in these cells. Doctor Cardona article.

Doctor Cardona: Stimulation of B-chronic lymphocytic leukemia populations by recombinant interleukin-4 and other defined growth-promoting agents.
Ghaderi AA, Richardson P, Cardona C, Millsum MJ, Ling N, Gillis S, Ledbetter J, Gordon J.
Leukemia. 1988 Mar;2(3):165-70.
Abstract
Monoclonal populations from 10 cases of phenotypically well-characterized B-chronic lymphocytic leukemia (B-CLL) and from a single case of hairy cell leukemia were assessed for their ability to respond by mitogenic stimulation to a number of agents described as growth-promoting for normal B cells. These included the recombinant factors interleukin-1 (IL1), IL2, IL4, IL5, and gamma-interferon, partially purified B cell growth factor (BCGF), B cell stimulatory factor 2 (BSF2), and a CDw40 antibody to the Bp50 antigen. With only few exceptions, no factor or combination of factors stimulated B-CLL populations directly to DNA synthesis. By marked contrast, the hairy cells were responsive to IL4, BCGF, and the CDw40 antibody. B-CLL cells could become responsive with the inclusion of the phorbol ester TPA (12-O-tetradecanoylphorbol-13-acetate) as co-stimulant such that half of the populations were now activated by IL4, particularly when BCGF was also present. Populations refractory to IL4 were, nonetheless, still responsive to BCGF. In only three cases was a significant effect seen with IL2. gamma-interferon could be either inhibitory or stimulatory and, in a few cases, modulated specifically the effects of IL4. In contrast to normal B cell activations, neither the CDw40 antibody nor a calcium ionophore synergized with TPA for stimulating the majority of B-CLL populations. BSF2 was stimulatory in the two cases examined while both IL1 and IL5 were ineffective where studied. No simple correlation was observed between the patterns of responsiveness and the expression of a panel of CD markers assayed on cells both freshly isolated and after TPA stimulation. The data demonstrate a functional heterogeneity not disclosed by simple phenotypic analysis and also indicate the range of activities which can impinge on the growth regulation of monoclonal B cell populations. Doctor Cardona article.